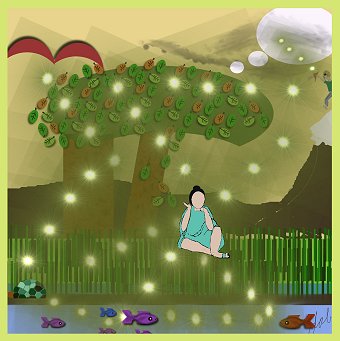 The Buddha says of the ignorance that begins this lesson, that it has no discoverable beginning. I take this to mean that in his view, it may have had an origin but it’s not one he could see from his perspective.

(AN 10.61:) “A first beginning of ignorance cannot be conceived, (of which it can be said), ‘Before that, there was no ignorance and it came to be after that.’ Though this is so, monks, yet a specific condition of ignorance can be conceived. Ignorance, too, has its nutriment, I declare; and it is not without a nutriment.– translated by Nyanaponika Thera

Nowadays science offers us some reasonable explanations of where the process began, which would have been in improvements in survival mechanisms over aeons. What arises in the process of dependent arising is a mechanism that has served our species well over the course of its evolution: the instinct to see ourselves as distinct and valuable individuals whose lives are worthy of preservation. This system has worked well in creating a creature who will defend itself and its ideas — for both of these (our bodies and our inventions) are key to the success of humankind. But it’s quite common for the things that serve us well to also have a dark side, and there is this about our tendency to self-protection: we perhaps take it a little too far. It seems that the instinct that served us well in our primitive days may not serve as well when applied to the increasing complexities of human interactions.

This series of posts is a *secular* understanding of dependent arising in the sense that it describes what’s going on in each link in terms of things we can see for ourselves — it is secular because it is confined to the here and now, the mundane, the pragmatic. The focus remains on what is happening in this life, and no reference is made to karma or rebirth.

A quick glance at the terms used for each link of dependent arising make it apparent that the Buddha was talking about a birth that follows a life described in terms of our actions (starting with contact with the world and what we feel in response to that contact) . Until fairly recently, it has been assumed that because the links were named with reference to rebirth, the only logical explanation was that what was being discussed was the fact of rebirth — and that paticca samuppada was effectively an endorsement of the Buddha’s belief in rebirth as the cosmic moral order. However, a new way of looking at the teaching recognizes that the Buddha used the structure of common concepts of the day about rebirth, to deny that what people thought was happening actually was, and to simultaneously point out what he saw was actually going on. This series focuses on the “actually going on” portion; the denial is not covered in these posts, but can be found in a paper called “Burning Yourself” recently published in the Journal of the Oxford Center for Buddhist Studies which can be found using a search like this one.

See also: Food and Fire in Dependent Origination (on the subject of the importance of understanding the term ‘nutriment’ because it is assumed to be understood  in definitions of Dependent Arising).